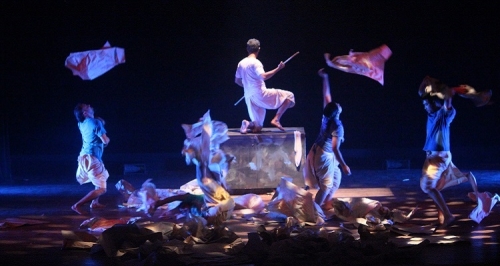 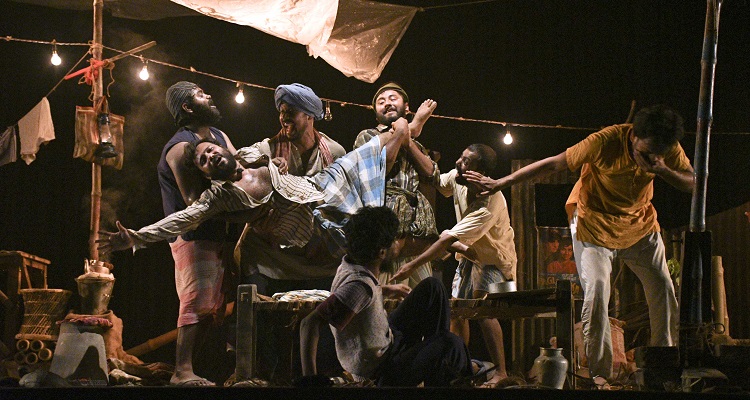 ‘Ghoom Nei’, the impactful and earthy closing play of META 2022, held onstage last night, became to me a metaphor for light coming in through a broken window. You are never sure of how much of the world outside is visible - hope creeps in through the cracks while the sting of despair is tempered with humour and banter that is at once dark, coarse and hard-hitting.

The play, by Kolkata theatre group Iccheymoto, is at heart a manifesto of the working class - written by the late thespian Utpal Dutt who had a strong Communist ideology - and is rooted in the swelling trade union movement of Bengal in the 1960s that gained impetus against a backdrop of unrelenting poverty, unemployment, the dismal state of refugee colonies, and a rising tide of discontent amongst the vulnerable. The crux of the play lies in the age-old and remorseless struggle of the working class against the whim of the master, a master who is ruthless in cutting his losses, who, as we see in the play, has no qualms in getting a precarious bridge-crossing opened up with a payoff and then paying his way further into getting a desperate truck driver to drive his consignment, despite the imminent danger.

The play takes place through the course of a night and pivots around conversations between customers at a highway dhaba, while giving a crash course in Bengali expletives that sets the mood on point! The customers are mainly truck drivers taking a break (since the bridge they need to cross has been closed) to eat, drink some potent country liquor, break into song and berate their fate with friends who are ‘comrades’-in-arms, united by the many compulsions their profession has forced then into. Overloaded lorries that have to be driven through the night to reach destinations by the required deadline, the threat of not getting paid if timelines aren’t met, corrupt policemen who have to be fobbed off by bribes, the looming fear of accidents, the persistent insomnia, families who wait at home and the stench of poverty  - pervade their lives. Each of the drivers has a story that ‘Ghoom Nei’ deftly weaves - there is  Indra who needs a job but can’t work nights and wants to redeem himself to his wife who views him with contempt; Keshto, a schoolteacher’s son obsessed with Hindi cinema , trying to learn how to drive a truck; Nakul with a burgeoning family, who is disarming as he tells the two sanctimonious newspaper reporters in the tea shop, that he is ‘addicted’ to producing children (the sex is a necessary escape from his sordid reality); Shona who suffers from nightmares about road accidents and needs three drops of a mysterious ‘medicine’ to stay steady at night; Hazra whose outward vigour shadows a brutally poignant family life; Aqlaq who is lively, often vulgar, a natural ring-leader, but full of generosity and concern for the others.

What I found redemptive in this heart of this darkness was the kindness, compassion and the camaraderie that comes through. The dhaba owner Ekkori who patiently waits on this motley lot, giving them freebies, smuggling in pints with their vegetable curry, serving a rather enigmatic and rambling gent - Uddhavda - who hints at a revolutionary past with his refrain of Dhaka of January 1932 - with resigned but loving acceptance. Ekkori stood out for me.

The songs of the truck drivers, including the compelling title track - a startling mix of Baul & Bollywood tunes, interspersed with ribald, roadside lyrics - were another high point. When they break into song, dancing impromptu around the quintessential dhaba charpoys, you can feel their catharsis, the release of tension in the midst of a gruelling night - a familiar feeling for those who toil - as relevant now as it was then.  A rendition of Tagore’s ‘Ekla Cholo Re’ with lyrics that are unabashed, unrefined and colloquial actually jolts audiences into feeling the power of protest and pathos.

‘Ghoom Nei’ is rich in symbolism as it makes a strong political and secular statement - even though it is set in Bengal of the 60s - as the director Saurav Palodhi says at the end - the play’s ideology stands against the ruthless consumerism of today and the need for a movement in the unorganised sector. Uddhavda’s constant allusions to the legendary 1930 Chittagong revolutionary Surya Sen, who fought the British and was brutally executed in jail, remind us of the need to protest. Amongst the final scenes is a moment when the stage is bathed in red light and the drivers, who incidentally never question each other’s faiths, hold up various objects - among which stand out the hammer and the sickle joined together  - the essential Marxist emblem of the proletariat. That scene is powerful and riveting and remained in my head as I shuffled out of the semi-dark auditorium into a darker, humid Delhi night.