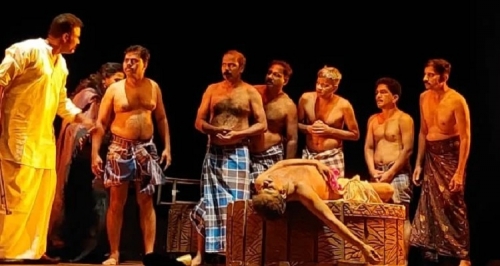 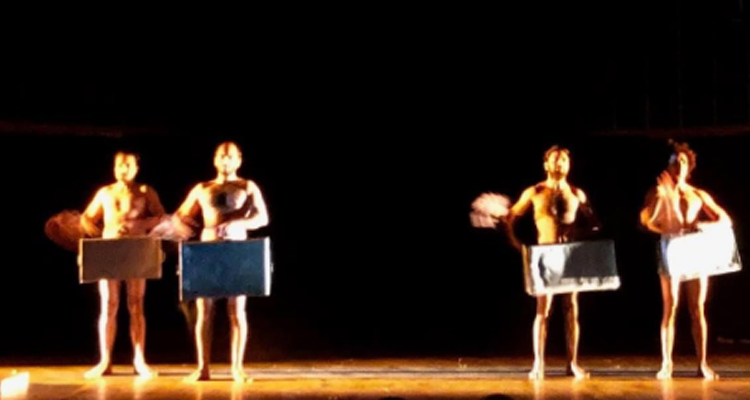 Text, Stage, Image: ‘The stage is a magic circle where only the most real things happen’

“We do on stage things that are supposed to happen off. Which is a kind of integrity, if you look on every exit as being an entrance somewhere else,” remarks Tom Stoppard on Rosencrantz and Guildenstern Are Dead. How does text and image fit together? How does one write for the stage? Various artists have found their own way to produce unique art through their own methodology — some formal and others informal.

Scene One: Under five brightly trained spotlights, five muscular men march onto the forestage with metal trunks. In a ritualised choreography, they undress until the viewers see them naked with the trunks covering their torsos. Then the trunk-lids open to show the emptiness within. Aspects of unclothing alluding to the metaphor of “missing” are strongly hinted at in the opening act.

On the left front-end of the stage, we see a large well-lit rectangular white tray with water. Behind that, stands a stack of red bricks (that are later rearranged into a neat low wall where rag dolls will be put up in a row). On the right, there are live musicians with all kinds of paraphernalia to create music — vocal and instrumental — and tones that are simultaneously tonal and atonal, symmetrical and asymmetrical.

The entire mis-en-scene is stark, sharply lit, with actors creating shapes with their movements and verbal texts. I use the phrase ‘verbal texts’ very specifically as they are not necessarily ‘dialogues’ in the traditional sense. One character says, “We are not fighting, we are just sad!” Later in a stylised and highly contemporary rap sequence in Hindi, the singing character/actor through his lyrics, drive home the state of our depleted angst-ridden human condition and the frayed political climate.

All of the above are snapshots from Neelam Man Singh Chowdhry’s newest and most accomplished play, Gumm Hai (Missing), premiered recently at the India Habitat Centre in Delhi as part of the Old World Theatre Festival. All the old hallmark imagery of Man Singh’s previous plays is here too — live musicians, lithe acrobatic movement of the actors who use soil-mud-grain-water to dramatic effect, precise stage lighting and crisp dialogue delivery.

P. S. Baber in Cassie Draws the Universe contends, “The stage is a magic circle where only the most real things happen, a neutral territory outside the jurisdiction of Fate where stars may be crossed with impunity. A truer and more real place does not exist in all the universe.” Ostensibly, “the play’s recurring leitmotif follows Pinki, a young girl of eleven who has gone missing from her village for two months. It examines how an inexplicable loss irrevocably changes the dynamics within a family and the community. These varied skeins of narratives are dovetailed to examine and understand grief, loss, death, human affirmation and survival.” Man Singh says, “It is sourced from many references including The Seven Stages of Grieving, a performance text by Wesley Enoch and Deborah Mailman, that dips into the history of the aboriginal.”

Neelam Man Singh Chowdhry, one of India’s leading theatre artists, creates dialogue through dialogue — dialogue between her as a director and her actors, dialogue between the personal and the public, dialogue between texts she has read and her own inspiration derived from them. She says, “One may assume that this freewheeling sourcing, where at one moment I am inspired by Anuradha Kapoor’s Naale Waali Ladki and in yet another by the movie Three Billboards allows you greater creative freedom. However, it is a very complicated space to work from as against a structured text. It is like a jigsaw puzzle where you try to fit in varying references, it is akin to having many stories stitched together with a common thread.”

A lot of it is improvisational, at least the incipient taking off points are — and these over rehearsed time evolve tightly creating an intense inter-relationship between text, image and stagecraft. The stage blocking is impeccable — vertical, horizontal and circular planes are seamlessly conjoined and subtly distinct at the same time.

Man Singh’s modus operandi reminds me of Frank Hauser lines from Notes on Directing on a director’s role: “You are the obstetrician. You are not the parent of this child we call the play. You are present at its birth for clinical reasons, like a doctor or midwife. Your job most of the time is simply to do no harm. When something does go wrong, however, your awareness that something is awry — and your clinical intervention to correct it — can determine whether the child will thrive or suffer, live or die.” Gumm Hai is a fabulous production with fine acting and haunting live music. It is minimalist, urgent, tightly wrought, politically relevant, and at the same time personal, moving and wisely sad — it is one of her best works thus far!

Deepa Mehta, the acclaimed film director of excellent films like Fire, Earth, Water and among others, pronounced Gumm Hai as “a wonderful play,” adding further that “Neelam is a brilliant artist, a brilliant director, and the show that she has done blows your brains out.”

Gumm Hai moved the packed audiences to tears. “Theatre is not merely about intellect, it is created through the heart,” says Man Singh. “What can we do except telling stories? Artists have no constituency. But they do have a voice, which can’t be suppressed. Art generates a response and a reaction, which may not catch many eyeballs. But silence is not an option.” She has no qualms of openly acknowledging the challenges: “An attempt is being made to muzzle our voices. After all, you don’t take a sledgehammer and cut tongues. You just shrink the space for dialogue by throttling funds.”

At the end however, the play is deeply personal as it is public, politically searing and intensely moving. It traverses through time highlighting bereavement, political anarchy, loss of homeland (which coindidentally happens to be a timely allusion to the current bifurcation of Kashmir) — ultimately showing how our own psyches are getting hollower and hollower, how the pillars and foundations of our institutions are being effaced, how the state is slowly corroding everything until all is “missing”, everything is “gumm hai”.